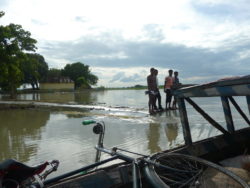 Over 38 lakh people have been affected in 12 districts and 11 deaths are reported so far by the floods in Bihar. The residents are still in distress while the water of Bagmati and Gandaki rivers flooded the parts of Muzaffarpur district in Bihar after a heavy downpour. People took shelter in shelter homes and shifted from low lying areas to elevated places when their homes got submerged in water.

More than 87000 people have been affected in the district of Muzaffarpur, Bihar due to the terrible floods whereas in Supaul the number reaches 81,198. The water level of almost all rivers including Kamala Balan, Budhi Gandak and Mahananda have crossed the danger level.

Ramchandra Do, Additional Secretary of Disaster Management Department have claimed that around 19 relief camps have been set up where more than 25000 people have taken shelter. Besides this, 989 community kitchens have also set up and are running in the flood-affected areas which feeds more than 5 lakh people daily.