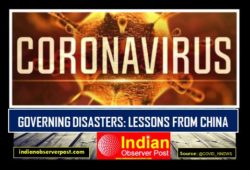 India Can’t Afford to Do Business As Usual

China has built a makeshift hospital in 10 days to battle against the novel strain of coronavirus in Wuhan, the epicenter of the virus outbreak in central China’s Hubei Province. Can India even think of doing the same in such situations?

By Prof Santosh Kumar, NIDM
New Delhi, Feb 25, 2019: The deadliest virus in recent times has spread its wings to almost 29 countries around the world; India is also one of them. After China, Italy, Iran, and Korea have alerted their people regarding Coronavirus spread. Italy and Iran ordered lockdown for virus hit areas.

If we take a new phenomenon of China which is reeling under the severe impact of Coronavirus disaster, until late 2019, this was not known popularly in the public domain. Now it is well known and it is considered a global threat.

China alone has lost billions of dollars as its economic impact and lost nearly 2500 lives and more than 77000 are affected. WHO has declared COVID-2019 as a Public Health Emergency of International Concern (PHEIC) for Global Communities. India too has found 18 positive cases.

It is seen that Cases were initially identified in Wuhan, capital of Hubei province in China in December 2019. Cases now reported outside China have predominantly been in people who have recently traveled to Mainland China; however, a few cases of local transmission have also occurred. China is tackling the epidemic on a war footing.

As various sources define it, coronavirus is one of many viruses that cause diseases in mammals and birds. In humans, coronaviruses cause respiratory tract infections that are typically mild, such as the common cold, though rarer forms such as SARS, MERS and COVID-19 can be lethal as its affect throat and quickly affecting the respiratory system. Symptoms vary in other species: in chickens, they cause an upper respiratory tract disease, while in cows and pigs they cause diarrhea. There are no vaccines or antiviral drugs to prevent or treat human coronavirus infections.

The outbreak began in December 2019. The repeated mingling of people and animals in china means that viral mutations that infect humans are likely to arise.

The numbers of reported cases are rising exponentially. Many experts and governments have praised China’s way of handling this new epidemic disaster. Its scientists have coped better with the Wuhan virus than they did with SARS in 2002-2003.The quarantine process, scientific intervention, diagnosis, treatment facilities, treatment of the patients, isolation of the city and individuals probably would have a challenge in South Asian nations, Africa and in many other countries of the World.

It is being said that China could do it because of the authoritarian government. The GDP of China has slipped. It is estimated that their growth will be 2 % which was 6% before the outbreak.  Exports have declined. International travel is almost nil.

The city of Wuhan is deserted. People have imprisoned themselves inside the house. Food is being distributed by the government as home to home delivery. The supply chain has got disrupted as many companies in the world have their manufacturing.

China could create new health facilities for treating the virus in record time. All the doctors, paramedic nurses who are attending affected people are not allowed to move out of the Wuhan city to other places. Likewise, the government is also keeping a track of all the people who have moved in and out of China within a month’s period prior to the onset of the virus.

It’s an exemplary way of handling disasters. Party claims that it is more efficient at governing than democracies. The virus control campaign, it reads, “Find it Early! Treat it Early! Medical fees All Free! (the economist).

As The Economist, writes that the China response to the virus has been unmistakably authoritarian, involving the locking down of Hubei’s cities and mandatory orders to stay indoors for a fortnight for those who leave Hubei head to such centers.” at Shanghai. But probably such stringent measures are not possible in democracy unless all political parties have to bring on the board. Otherwise, any government will feel the heat and ultimately people would suffer.

Now, we see how India would have responded to such situations if the outbreak would have happened in any of the states. Are we prepared? Currently, India responded exceptionally well in taking out its own people from Wuhan city, quarantine them at the airport/ entry point, geared up its medical emergency team, checking and nudging every individual case, started public campaign for taking precautions, media also played a vital role in informing people about it to avoid any panic situation, in case it is reported positive. India also responded earlier in 2002-3 at the time of SARS break out. Please note the danger is not over as yet. 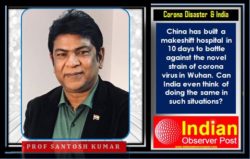 Now this situation rises to fundamental questions when it comes to preparedness. How a disaster response system should be developed at the local level? Whether India could have done and handled pandemic in a similar way or would have gone in a more democratic manner? How our governance system could have imposed orders, confinement etc? Whether such stringent measures, which are needed, could have taken so easily in India as China did?  Do we have all agreed with the people or parties, international communities/organisations, a protocol where governance can respond together with or without confinement?

Proactive discussion with the concerned authorities and formulating of an action plan for the future is the need of the hour. Disaster Governance’s capacity building actions should be then taken on priority basis.

Thanks to the recommendations of the 15th Finance Commission as they have allocated resources for both risk reduction and capacity development.MHA and NDMA are drafting guidelines for it. May be lessons from China would help in advance planning and outlining protocols. A multi-party crisis management group or discussion is the need of the hour both at the state and national levels. Doctors and paramedics need to be trained in large numbers for addressing the issue in India. Mask, medicine, hand wash, sanitizers are to be kept in order and adequately to avoid shortages.

Currently, India in the background of the novel Covid-19 is taking all preventive measures by IT SAP companies, even in the spread of H1NI in Bangalore, Gurugram, Mumbai cities by closing their offices and allowing to work from home. May be such preventive measures of avoiding mass congregation, without creating panic be initiated for Covid-19 at least for a month.  India should also plan to build its capacity for helping neighbouring countries in protecting the virus, in case of outbreaks.

It is impacting deep on the economy as well as the life of the people. China, despite the stringent measures, has lost nearly 2500 lives and economic growth slipped by 4 % so far. Can India afford it?

In Global Economy, country’s interdependence on each other has increased and it also is experiencing direct and indirect loss due to various disasters.

Thailand’s floods of 2011 led to the breaking of the supply chain of goods and services. Similar situation has aroused in China as many companies have their manufacturing units there, facing a huge challenge in the continuity of business due to supply chain management.

India itself is not allowing any shipment from china. And, this could happen with any country. There is need to bring private sector on the board too.

Disaster is an issue of development governance. Protection of the citizens from the disaster is a fundamental constitutional right under Article 21, Right to Life with dignity. So, in the changing scenario, it is time to pause, ponder and redefine the governance of disaster management in the country especially for tackling some extraordinary situations. Business as usual will not work.

China has built a makeshift hospital in 10 days to battle against the novel strain of coronavirus in Wuhan, the epicenter of the virus outbreak in central China’s Hubei Province. Can India even think of doing the same in such situations?

(Note: Views expressed in this article are personal views of the author and it doesn’t reflect his official views.)

15th Finance Commission: Beyond Disaster Response UN releases US$15 million to help vulnerable countries battle the spread of the coronavirus