Coronavirus Live Updates: More Than 800 Have Died in China, Surpassing Toll From SARS

The new coronavirus has killed more people than SARS did.

The coronavirus death toll in China has risen to 811, surpassing the toll from the SARS epidemic of 2002-3, according to official data released on Sunday.

The number of confirmed infections rose to 37,198, according to China’s National Health Commission. Eighty-nine deaths and 2,656 new cases were recorded in the preceding 24 hours, most of them in Hubei Province, the heart of the outbreak. A United States citizen died from the coronavirus in Wuhan, the provincial capital of Hubei, American officials said on Saturday.

The SARS epidemic, which also began in China, killed 774 people worldwide. There have been only two confirmed deaths from the new coronavirus outside mainland China — one in Hong Kong and one in the Philippines.

Many doctors believe that deaths and infections from the current epidemic in China are undercounted because testing facilities at hospitals and laboratories are under severe strain.

The number of new cases confirmed in the country has stabilized in recent days, but World Health Organization officials cautioned against reading too much into those numbers, saying that Wuhan and Hubei were still in the midst of a “very intense outbreak.” 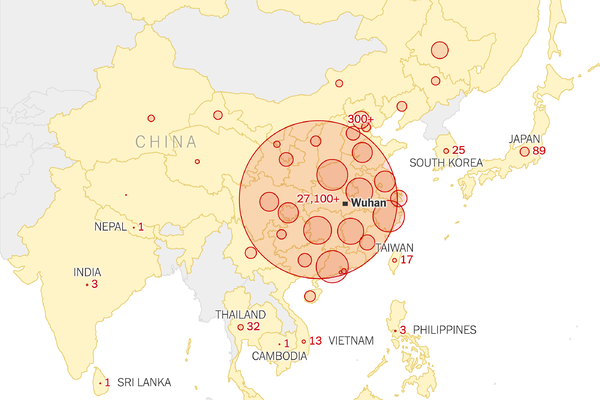 Coronavirus Map: Tracking the Spread of the Outbreak

The virus has sickened more than 37,500 people in China and 24 other countries.

The measures put in place in Hubei appear to be “paying off,” said Dr. Tedros Adhanom Ghebreyesus, the W.H.O.’s director general, but he warned that the course of outbreaks like these is unpredictable. “We have to understand it with caution because it can show stability for a few days and then they can shoot up,” he said. “I’ve said it many times, it’s slow now but it may accelerate.”

Six more people on the Diamond Princess, the cruise ship that has been quarantined for nearly a week in Yokohama, Japan, have tested positive for the coronavirus, passengers were told in an onboard announcement on Sunday.

About 3,700 people on the ship, including crew members, have been quarantined since Monday, after it was learned that a passenger who disembarked in Hong Kong on Jan. 25, during an earlier cruise, had tested positive for the virus.

The Japanese health authorities have tested hundreds of people on the ship, and as of Saturday, 64 had tested positive for the coronavirus. The six new cases announced Sunday would bring the total to 70. The announcement, by the ship’s captain, said Japan’s Health Ministry had confirmed the new cases. The ministry has yet to make a public statement about them.

The announcement, a recording of which was posted online, said the six people were being taken off the ship for treatment. It also said that nine other passengers had been taken to hospitals for reasons unrelated to the coronavirus.

Separately, all passengers aboard a cruise ship that had been held for days in Hong Kong, the World Dream, tested negative for the coronavirus, a Hong Kong health official said on Sunday. The official added that the passengers would be allowed to disembark.

They had been screened because eight people from mainland China who were on a previous journey were found to be infected with the coronavirus.

The World Dream, which is carrying about 3,600 passengers and crew members, had traveled from China to Vietnam in January.