Cyclone Pawan and Amphan to Form Simultaneously over Arabian Sea 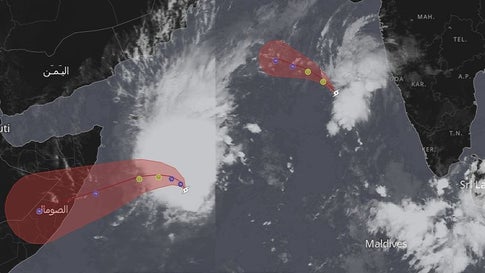 A record seven cyclonic storms have already formed over the north Indian Ocean this year. Now, two deep depressions are intensifying rapidly and are set to concentrate into cyclones simultaneously by Wednesday evening. So many cyclonic storms have not formed over the north Indian Ocean basin in a single year since 1976, when a record ten storms were recorded.

The depression over the east-central Arabian Sea has now intensified into a deep depression and is located at around 440 km away from the Goan capital Panaji. Forecasts from the India Meteorological Department (IMD) suggest that the system is likely to intensify further into a cyclonic storm by Wednesday evening.

The US Joint Typhoon Warning Center (JTWC) has already categorised the system as a cyclonic storm. According to JTWC, it is likely to maintain its intensity until around Thursday noon and then weaken into deep depression by late night on Thursday. No significant threat has been forecast to the Indian mainland.

The IMD predicts that the deep depression will intensify into a cyclonic storm by Wednesday evening with a maximum sustained surface wind speed of 80 kmph. The national forecaster reports that the cyclone is likely to maintain its intensity till Thursday morning and weaken into a deep depression by Thursday evening. Under its influence, light to moderate rainfall is forecast at a few places along Konkan and Goa during the next 24 hours till Thursday morning.

Strong winds and very rough sea conditions are forecast around Lakshadweep area, the southeast Arabian Sea, and along Kerala, Karnataka, Goa and Maharashtra coasts. Fishers are advised not to venture out in these areas till Thursday morning.

Another deep depression over the southwest Arabian Sea has remained stationary in the region and slowed down its intensification over the past 12 hours. The system is around 670 km away from Socotra in Yemen and is likely to intensify into a cyclone by Wednesday evening. It is expected to move in the northwestward direction, towards Somalia coast over the next three days.

Once the two deep depressions intensify into cyclonic storms, they will be named ‘Pawan’ and ‘Amphan’. The name Pawan is as per suggestion by Sri Lanka, while Amphan is a suggestion from Thailand.

The naming of cyclones follows the guidelines set by the WMO, which stipulates that the countries in the region must name storms in any ocean basin. For the north Indian Ocean, eight countries suggest the names, including India. Pakistan named the last cyclone ‘Bulbul’, which had hit the Sundarbans Delta in West Bengal and Bangladesh.

Tsunamis off coasts of Iran, Pakistan could reach Indian shores: INCOIS World shows no end to heating up

Lightning Strikes in Bihar killed at least 7 with several injured