BBMP to pay a pittance for Hulimavu havoc 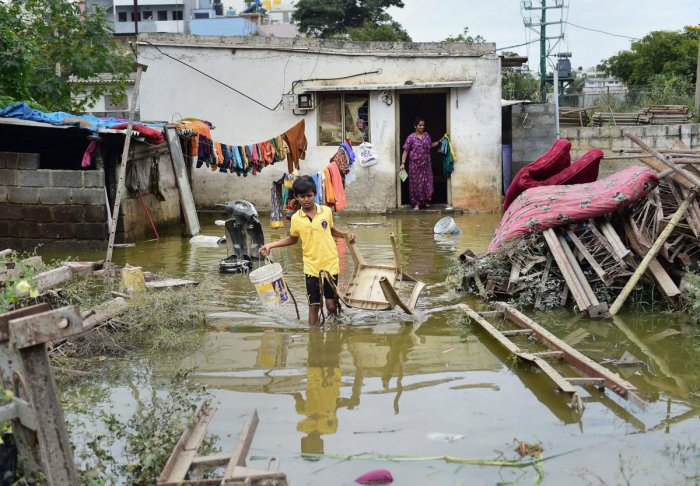 Only 319 out of the 800-odd households that suffered damages in Sunday’s floods in Hulimavau are eligible for government compensation. And each household will get a maximum of Rs 50,000.

Housing Minister V Somanna announced the compensation after visiting the affected areas in southern Bengaluru on Monday. The state government will pay Rs 40,000 and the BBMP Rs 10,000, he said.

The compensation will barely cover damages running into lakhs of rupees that many residents said they had suffered.

Lavanya, who runs a boutique in Saraswathipuram, was seen trying to salvage belongings from the store on Monday. She pegged her losses at Rs 5 lakh.

The BBMP said the immediate task was to help residents return to their homes.

BBMP Commissioner B H Anil Kumar said the civic body was providing food and shelter to the homeless, and workers were clearing floodwater from homes.

The 319 houses that are eligible for compensation were identified in a BBMP survey. A BBMP official said they would assess the actual income of each household and the losses declared by the house owner before deciding the compensation.

Abdul Wajid, opposition leader in the BBMP, called the compensation “unfair”. “The BBMP must give fair compensation because the lake breach occurred because of its failure, not because of any natural disaster,” he said.

The BBMP paid Rs 10,000 to each family affected by the breach of Doddabidarakallu Lake last month even though the damages were in excess of Rs 50,000.