NEW DELHI: Noting that 45% of its garbage remained unattended and piled up on roads even as Delhi had virtually been converted into a gas chamber, the Supreme Court said on Monday that the city was no longer liveable and had become worse than “narak” (hell) with people dying of various ailments due to pollution.
Track the pollution level in your city
The apex court, which has been fulminating over lack of official intent, expressed anguish that governments had failed to act to deal with pollution and the situation was worsening with time despite it passing a series of orders over the years. It accused the Centre and Delhi government of politicising the issue instead of cooperating to come to the rescue of the capital’s residents. 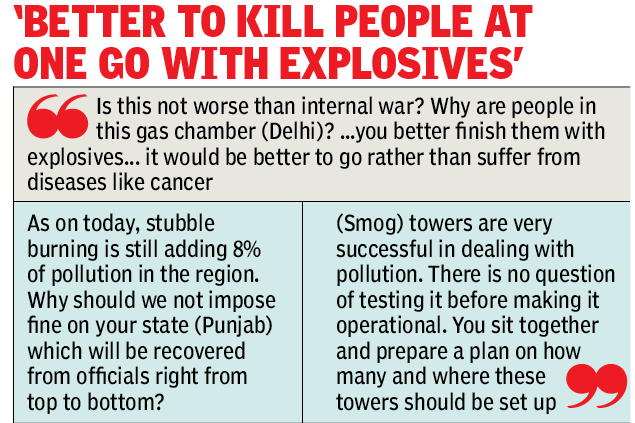 When Delhi chief secretary noted that 45% of garbage was not being lifted by civic agencies, an annoyed bench burst out, asking why the government should not kill people in one go by using explosives instead of letting them die slowly in a gas chamber.
The SC asked the Centre to decide within 10 days on setting up smog towers across the city to purify the air.
2 power centres are hurting city: Chief secy in SC
The Supreme Court said smog towers, set up China, were proving to be successful in dealing with pollution. “There is no question of testing it before making it operational. It is just lack of will power on the part of government. You sit together and prepare a plan on how many and where these towers should be set up,” the bench said and added that other technology like anti-smog guns should also be examined.
The court lamented that no government wanted to take anti-populist measures. “You are not sitting together but are blaming each other. The issue of pollution is being politicised and it is happening under the nose of the court. We would not tolerate it. Blame game is not serving the people of Delhi… We cannot allow people to die,” a bench of Justices Arun Mishra and Deepak Gupta said.
Explaining steps taken to deal with 13 pollution hotspots, the Delhi chief secretary informed the court all steps were being taken to keep the city clean. Facing the ire of the court, he admitted Delhi was facing a governance problem due to two power centres. He hinted that differences between the Centre and Delhi government were affecting proper administration.
The bench made it clear that this couldn’t be an excuse for the administration’s inaction and directed both governments to keep aside their differences and work for the welfare of people.
It slammed Uttar Pradesh, Punjab and Haryana for failing to implement its order to stop stubble burning, which aggravates pollution levels in NCR. SC said it was high time to make state governments and officers responsible for not providing clean air and water. It issued notice to all states seeking a reply on why they should not be liable to pay compensation for pollution-borne diseases like cancer.
The court also decided to examine the pollution problem in other cities. It asked all states and UTs to file reports on water and air pollution and their action plans. It directed states and Central Pollution Control Board to furnish data on water quality in rivers and steps taken to keep them clean.